We have 13 songs for Sing Sheet Music

Sing is a 2016 3D animated film produced by Illumination Entertainment. It's a musical comedy - drama featuring some 60 songs from famous artists. It also has an original song from Stevie Wonder and Ariane Grande called Faith.

The film is anthropomorphic animal based which is to say it depicts animals who have human characteristics. The poor things! The animals enter a singing competition, hosted by a koala hoping to save his theatre. Ther are some gin names involved including Seth MacFarlane, Matthew McConaughey, Reese Witherspoon and Scarlett Johansson.

With over 60 tunes to choose from, it's hard to know which ones to highlight but we love Bamboléo, I'm Still Standing and the evergreen Hallelujah. 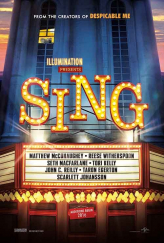